SEPT. 11, 2020  |  Georgia’s unusual special election this fall for the unexpired two years of Johnny Isakson’s term gives the voters unusual choices. Instead of the political parties picking who will run, individuals decided themselves to run for the post.

What this means is that it gives the people a chance to select between ideas of the candidates, not cast a vote based on a political party’s nominee. That’s good, but such a situation probably won’t be around too long. The Georgia Legislature, governed by parties, will probably close voting choosing an idea to vote for in the next session. Too bad. Picking candidates from ideas is  basically sound and sensible.

Those 21 people seeking to become our senator offer some excellent ideas. This week we talked with Wayne Johnson of Macon, an expert on student government loans, who is banking his entire campaign on this subject, since he thinks it is so much of a problem. He worked for Betsy DeVos in the Department of Education, heading the student loan program for this country, overseeing student loans of $1.6 trillion in taxpayer money.

“The full measure of my campaign is focused on the student loan debt in this country,” he said. “The system is terribly broken. It is an abomination, and can destroy the fabric of America.  It has only one beneficiary: the colleges and universities. They can charge whatever tuition they want to, since they get the money essentially from the students, debt free and without a credit check.

“There is an unlimited insatiable appetite on the part of the colleges to encourage students to take out loans.” 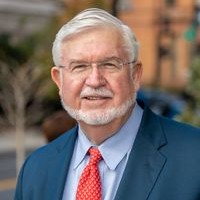 He emphasizes that 44 million people owe student debt. “And more than 85 percent of these loans will never get repaid. It’s a poison students don’t recognize they are getting into when they take out loans.  They don’t realize until later in life that it will eat their life away. ”

Johnson feels like student loans were good as long as students borrowed from banks, and that loan was guaranteed by the government.  “Then you had some balance. But 20 years go, the government started to make direct loans to the students. The government said it wanted to capture those profits, and changed the rules.

“If a student was going to graduate school, it was unlimited what the student could borrow. And today some of those students owe $2 million to the government in student debt, and lots more owe $1 million. No matter how much they owe, the repayment is figured as a percent of debt. Many will never get out of this debt, and our country suffers.” He maintains that 85 percent of the loans will never be repaid.

Johnson, a graduate of Mercer, with an MBA from Emory, and Ph.D. from Mercer in higher education leadership, concentrated his research on student loans. He may know more about student debt than anyone in the country.

What’s Johnson’s solution?  One part of the solution would be to let every high school graduate have $50,000 for free to finance their undergraduate or  vocational education.  And he has a way to pay for that. The idea is a little involved.  But he has a solution. We invite readers to go to his web page, www.johnsonsenate.com, to learn more.

While on that site,  you’ll be learning more about ideas, rather than concentrating on one of the political parties. That can be a good way to determine how you will vote.