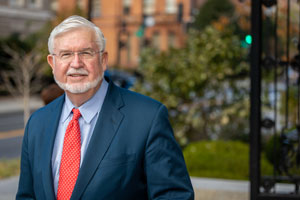 He used to work for U.S. Secretary of Education Betsy DeVos. Now, he wants to cancel your student loan debt.

Here’s what you need to know.

Johnson, who is now a candidate for the U.S. Senate in Georgia, has proposed a new student loan forgiveness plan:

DeVos recently appeared on Special Report with Brett Baier on Fox News, and shared her opinions on the notion of cancelling student loan debt, which has been proposed by several Democratic presidential candidates, including Sen. Bernie Sanders (I-VT) and Sen. Elizabeth Warren (D-MA).

“Their proposals are crazy," DeVos said. “Who do they think is actually going to pay for these? It's going to be two of the three Americans that aren't going to college paying for the one out of three that do.”

Sanders has offered the most ambitious plan yet to address the nation's student loan debt. Simply put, Sanders' plan would cancel all $1.6 trillion of federal and private student loan debt. There is no eligibility criteria; everyone qualifies. Sanders will fund his student loan forgiveness plan through a new tax on financial transactions, which he expects could raise more than $2 trillion over the next 10 years.

Your Next Action Steps

This student loan quiz takes less than one minute to complete and provides you with a free, customized student loan repayment plan.